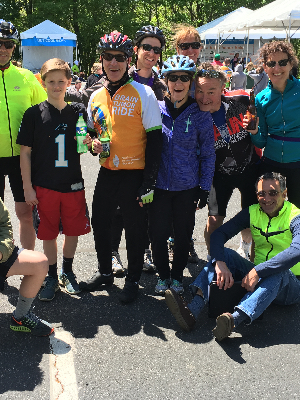 BE A STARR - JOIN TEAM STARR - HELP FIND A CURE

The Brain Tumor Ride is a fun and inspirational day where the brain tumor community unites to inspire hope and take action in the fight against brain tumors.

Progress in this fight starts one team, one rider, and one dollar at a time. Like the National Brain Tumor Society, we are fiercely committed to finding a cure.

Captain - Sandy Starr - A veteran rider. He loves to ride in the rain but prefers to ski powder. His bike is named "Dark Starr" and is very fast! He has new knees and is better than ever.

Patti "LA Woman" Goldberger - She moved to LA and now rides on Rodeo Drive rather than Brattle Street. She is a veteran of many Brain Tumor rides. Sadly, her new bike "White Lightning" was recently stolen in LA. It may not be safe in LA, maybe she should move back to Cambridge. Even without "White Lightning" Patti says she is going to rent a bike and ride along the beach in Santa Monica. Very nice!

Emma Starr -  She rode last year and we hope that she rides this year. She bakes excellent bread and makes very tasty beef wellington.

Tyler Starr - Rookie of the year three years ago and now is in medical school. Someday he may have time to ride with us again.

Bradley Starr - An excellent rider and teacher and is now riding for the fourth time. Perhaps he might be captain of Team Starr some day.

Julie Starr Duker - Julie is a very good rider and former hockey player but isn't sure if she can ride this year as she is very busy playing tennis and doing other things. We hope she rides.

Andy Gillies - The team doctor. He is very busy and we hope that he gets in some training rides before the event.

Kimmie Gillies - She is Andy's daughter and is very fit!

Robert "Shackelton" Mann - Who knows if he can ride this year. He lives in Jackson Hole and probably had 150 ski days this year. When last heard from he was in Alaska on a sailboat getting dropped off ashore and skinning up a glacier and skiing back down to the boat.  We hope that he comes back in time to ride with us wherever he is.

Dianne Hurley - Team Starr hasn't heard from this former ice hockey player yet. I hear she has been riding daily in the Catskills on the mountain "crusher" course.

Sue Bear - Is this powerful rider joining Team Starr this year? Who knows, only time will tell.

Jo-Anne Haney Tilton -  Team Starr hopes Jo-Anne will be riding this year. Jo-Anne taught Team Starr an important lesson, that one can bike ride and shop at the same time! Also, she is a doctor and Team Starr needs all the medical support it can get!

Jennifer Silver is an excellent rider. She will always be on Team Starr even if she dosen't ride.

Sponsorship - Bear Duker is trying to get Team Starr sponsored. I wish he would because Team Starr needs some swag. Also, Bear is trying to get Draft Kings to do a fantasy event for the ride. It is hard to say what the over/under on whether Julie will be riding. Bradley is working on some "prop" bets on the ride, like at what mile marker will Andy Gillies cramp up.

Please note: If you are interested in donating to this team, please select a member of the team and select the donation option from his/her page or make a general team donation.

Your support ensures this important work will continue.