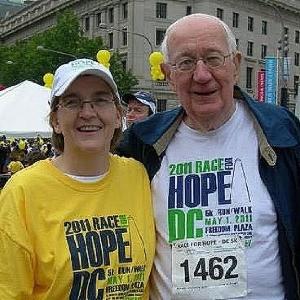 Join me in my efforts to raise money for brain tumor research.

As many of you know, brain tumor research is near and dear to my heart ... or should I say brain. I had my first seizure in May of 1991.  When I was initially diagnosed with my first brain tumor (in 1993), I was told that it was inoperable. Several years later as my tumor began to grow, I had additional localized seizures including a seizure while I was snorkeling on the Great Barrier Reef in Australia in 1996.  That year, my doctor at Johns Hopkins referred me to Dr. Jon Weingart.

Advancements in surgical techniques made it possible for Dr. Weingart to remove my tumor. I was happy to finally have this thing removed.  However, when I awoke after the surgery, I was paralyzed on my right side.  The only thing that I could move was my right hand (which I could barely open and close).  I also had difficulty speaking. I spent the next 5 or 6 days at Johns Hopkins trying to make even the slightest movements with my right side. Evidently, the brain cells that were removed were responsible for transmitting the neurological messages to my right side.  My brain had to find new pathways to transmit the messages ... which is truly an amazing thing!

I was then transferred to inpatient physical therapy at another hospital.  Within a few days, it was discovered that I had a blood clot in my right leg.  So, after being told to keep trying to move everything on my right side, I was restricted to complete bed rest and told to limit my movements.  After 7 days of complete bed rest, I was sent home to continue my physical therapy.  I was able to return to work about 2 months later.

During one of my routine MRIs in May of 2000, Dr. Weingart informed me that the tumor was back.  I had not had any seizures since before my first surgery, so I was shocked.  I was told that I would need another surgery which would be followed by 6 weeks of radiation.  My second surgery was in June of 2000.  I remember that I practiced wiggling my fingers and toes in the operating room before my surgery.  The outcome of this surgery was much better than the first one.  I did not have any deficits. In fact, my surgery took place on a Friday afternoon.  At about 8:00 on Monday morning, I was told that I was being discharged.  Just a quick weekend trip for brain surgery!

It has been almost 23 years since my second surgery, which is more than five times the length of time between my 2 surgeries (Yee Hah!). It has been 27 years since I have had a seizure (knock on wood!). 18 years ago, I graduated to yearly MRIs. And, in October of 2009, I came off the seizure medication! I am hoping to stay "tumor-free". But if I do have a recurrence, I am hoping that future research can find a cure for brain tumors so that I won't have to have a third surgery.

Thank you for supporting me and The National Brain Tumor Society. I am not sure how I would have gotten through the last 32 (!!!) years without the generous support from my family and friends. You truly are the best.

Please support me with a donation by selecting the "DONATE NOW" button or join Team Scatterbrains by clicking on the "JOIN LINDA'S TEAM" button. Our efforts will help make a big difference!