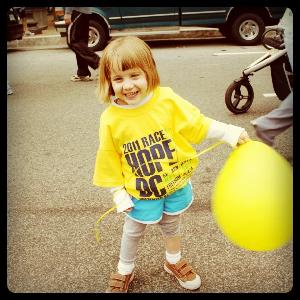 2023 update:
April 1st marks Sophie's 13th year of race for hope!  Please consider joining us to celebrate Sophie and all other brain tumor survivors and to raise money for more brain tumor research. She is almost 10 years treatment free!

Sophie was diagnosed with a brain tumor on her 2nd birthday. At the time, Sophie and her family were living in Indonesia and she underwent surgery in Singapore. During surgery, it was determined that her tumor was on the brainstem and surgeons could not go further with the technology available.  Once back at Children's Hospital in DC, an additional surgery was preformed to debulk the tumor.  Unfortunately, after a few weeks, the tumor had returned in size and Sophie was started on a 14 month standard treatment of IV Chemotherapy of carboplatin. Unfortunately, after a severe allergic reaction, this was discontinued.

A 2nd line treatment was found and through July 2010, Sophie was treated with actinomycin and vincristine. The tumor recurred after a very short chemo break in December 2010, prompting a third neurosurgery.

We had just one-year chemo-free until the tumor again progressed in November 2011. The recurrence was initially treated with Gleevac until September 2012, with Temodar added for the last two cycles. The tumor kept growing and spots were found in her spine.

At this point doctors were out of FDA approved treatment options. After much advocacy, Sophie was enrolled on a phase II clinical trial.  Sophie was treated with a MEK inhibitor, selumetinib, from October 2012 through October 2014.  one of the very few available to pediatric brain tumors. It was an oral chemotherapy agent but required frequent blood work and hospital visits.

Since that time, Sophie has been off therapy with stable disease, as monitored through serial MRIs.