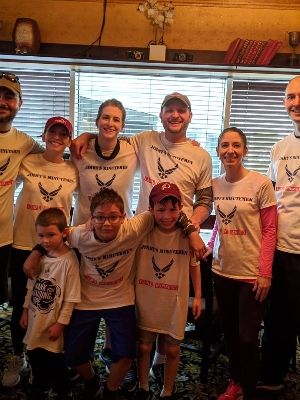 Rainy race with Jimmy's Minutemen (And Women) at Race for Hope DC 2019. We can't wait to run again in downtown DC.

I formed Jimmy's Minutemen for the Race For Hope because it's one small way I can make a difference in the fight against brain cancer and brain tumors, medical conditions that have plagued my aunt, my sister-in-law, and took the life of my beloved father, Jimmy Wayne Rogers.

My dad was diagnosed with brain cancer in 2003.  The following six years of his life were dominated by surgery, chemotherapy, and various radiation treatments to fight the most daunting of foes, Glioblastoma.  These were supposed to be his golden years.  He had just retired and had plans to go fishing and camping with my mother.  He wanted to find peace in his beloved outdoors with a rod and reel whenever his heart desired.  He even converted an old school bus into an RV just for this purpose, but he barely got to use it.  Instead, those fishing trips he had long dreamed of were replaced by a nightmarish series of cancer treatments.

My mother was also just beginning her retirement years when Dad was diagnosed, and in many ways I run this race every year to fight back for her as well.  She stood unwavering at my father's side through countless doctor's appointments and hospital stays.  She was his constant through every treatment and every indignity he suffered at the hands of the disease.  My father's personality changed markedly after his surgery in 2003, and she was forced to watch the man she had been married to for four decades slowly fade before her eyes.

I also run for my 11-year-old son, Jimmy, and his 8-year-old brother, Jackson.  More than anything I wish my boys could know their grandfather, as he was before cancer struck.  If only they could know first-hand how amazing he was.  I imagine Dad teaching the boys how to fish, maybe even with the same tiny "Snoopy" fishing pole he used to teach me.  If the boys had the opportunity to know their Grandfather they would know a man who worked hard every day of his life so his family would want for nothing, a man who had a passion for sports and enjoying nature, and a man with a steadfast faith in God.  Essentially, he was the perfect role model.  I was only 3 months pregnant with Jimmy when my father passed away on September 27th, 2009.

The team name, "Jimmy's Minutemen", is a reference to my father's 21 years of service in the Air Force.  Dad was the ultimate jack-of-all-trades.  He was a carpenter, a plumber, an electrician, and a mechanic.  He spent his years in the USAF working on missiles.  Towards the end of his military career he led a group of airmen who worked on the intercontinental "Minuteman" missile.  They dot the Montana countryside, interminably interred in remote silos.  Obviously, the name "Minuteman" is a referrence to the legendary Minutemen of the Revolutionary War. These were the militiamen who were trained to respond to a threat at a "minute's notice".

So on Sunday, May 1st, Jimmy's Minutemen (and women) are going to respond to the threat posed by brain cancer and brain tumors.  We're going to attack this 5K for the 9th time as a team, and we're ecstactic to be back in person in beautiful downtown DC after 2 years of virtual events in my northern Virginia neighborhood.  It will be a success if we can muster even the smallest fraction of resilience and persistence that I have seen in my family members who have suffered these afflictions.  We will run for Jimmy and Dee Rogers, Phyllis Kokoruda, and Trina Korst Rogers.  But most importantly, we will run to raise money to help ensure others will not share my father's fate.  My sincere hope is that someday soon, with the help of events like Race for Hope, we'll reach the finish line victorious over brain cancer and brain tumors.