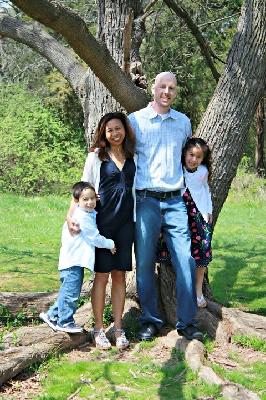 I lost my husband, John to cancer in 2013.  Although brain cancer was not the cause of his death, the brain tumor community had become part of our family during his last eight months from diagnosis.  We had joined a brain tumor support group and met so many others afflicted with this disease.  John really wanted to do something to help and decided to start a team - Team PMA (Positive Mental Attitude) for Race for Hope.  In March 2013, when John was in the hospital and we were given the terminal diagnosis from the Melanoma (skin cancer), the one thing that honestly kept John going was hearing how much money we had raised.  Even though he was having such difficulty breathing and holding his head up, his fist would go up in the air once I told him how we were doing!

We left the hospital at the end of March where John could not stand on his own and was dependent on oxygen. He was given gene targeted therapy to treat the Melanoma and in just 6 weeks, he recovered to the point where he could walk a 5K without any problems.  So, on May 5, 2013, he walked the race, he crossed that finish line and he led our team to raising almost $37,000!  He stood on the stage with his hands up in the air in victory - for himself and for so many others fighting for their lives.

Doing these races inspire the survivors in ways you could not imagine!  I never truly understood it until it was my husband walking in those shoes.  He felt strong and was proud he was able to participate in the race.  It was such an amazing day – John felt so alive!  This unfortunately was the last day that many of our family and friends saw John as he passed away less than a month later, but what a glorious day for them to see him one last time!

In honor of him and so many others we have lost, we will continue the fight as a family to find a cure.  We want the gene specific therapies that are available for other cancers as a treatment option for brain cancer patients.  That drug gave John ten extra weeks with his family.  It may not seem like a lot of time, but it allowed us to make a lifetime of memories for our 2 very young children at the time – Adison (7) and Alexander (5).