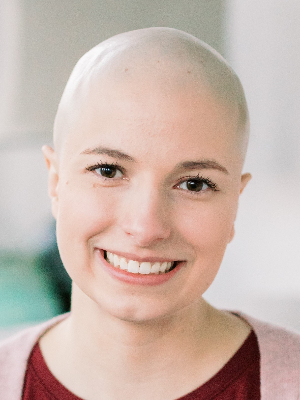 Beginning in December 2018, I started to experience episodes where the room would suddenly spin, my right arm and leg would feel tingly, and I would feel pressure above my right eyebrow. My gut told me that something was not right, but I am known to be a hypochondriac, so I tried to remain calm. My PCP suspected complex migraines and equipped me with tools to identify and track potential triggers. These episodes continued to occur, so my PCP decided to send me in for an MRI to 'rule out anything serious.'

On July 23, 2019, I went in for my MRI without any concern that they would find anything. Shortly after I arrived home from the MRI, my PCP called me and told me that the scan had revealed three lesions, including one in my left parietal lobe that was about the size of a lime. Based on the scan, the doctors suspected either a low-grade glioma or Multiple Sclerosis (MS).

The following week, I traveled to my hometown of Pittsburgh to undergo additional testing at UPMC. Based on the results of neurological exams, blood work, additional MRIs, a lumbar puncture, etc., the doctors determined that it was likely a tumor and that the episodes I was experiencing were seizures. They scheduled me to undergo an awake left parietal craniotomy (brain surgery!) on August 29, 2019.

My surgery went extremely well thanks to my brilliant and talented neurosurgeon and his wonderful team. When planning for my surgery, he used a technique called High Definition Fiber Tracking (HDFT), which allowed him to be very precise and aggressive when tackling the tumor removal. The operation was a great success, and it was not nearly as scary as I had anticipated. Since I was awake during the operation, I remember much of it, including various conversations and being wheeled in and out of the operating room. My neurosurgeon was very pleased with how the operation went, and it was considered to be a complete resection!

I went 'home' to my parents' house the day after the surgery and began my recovery. Overall, it went better than I was expecting, but at times I would become very sensitive to loud noises, and I definitely had some issues initially with coordination. I needed help with everything, including showering, getting dressed, going up and down the stairs, and using the restroom. My family handled my recovery with extreme grace, and because of their support I was able to feel close to 'normal' just two weeks after the operation.

On September 16, 2019, I met my oncologist and radiation oncologist to go over the pathology results from my tumor and determine if further treatment was necessary. My diagnosis ended up being Anaplastic Astrocytoma (Grade 3 Glioma), which was a surprise to us since we were expecting Grade 1-2, but I am fortunate to have some favorable mutations (IDH!) in addition to the complete resection. We set up a plan to do 6.5 weeks of concurrent radiation and chemo, followed by 12 months of chemo at a higher dose.

Never did I think it possible that I would get diagnosed with brain cancer in my late 20s and have to undergo aggressive treatment. After brain surgery, 33 sessions of radiation, and 102 doses of chemo, I finally finished treatment on November 1, 2020! I know that my war against this cancer will never truly be over, but for now I have won the battle! #supportbraincancerresearch

I would also like to call out Microsoft for being a fantastic employer and for supporting me during this entire time. In particular, I would like to recognize Susan Vitale, Tanya Klapmuts, Michael Mahon, Josh Miller, Sharmarke Awl, and Ethan Alexander.