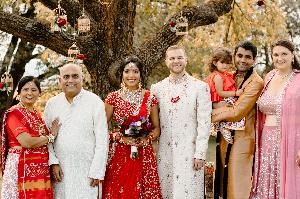 In September 2016, our father Jatin was diagnosed with glioblastoma multiforme, an aggressive form of brain cancer. In the next year, this loving dad, husband, and engineer underwent two brain surgeries, countless rehabilitation sessions, and a difficult battery of radiation and chemotherapy. Those who know Jatin know he's a fighter. He is known by his medical team for his cheery sense of humor, off timed jokes, and incredible strength. With the help of his children and wife, Jatin continues to do well five years after his diagnosis, a milestone that only a lucky few are able to see. Since then, he has experienced the birth of his first grandchild, and watch his daughter get married (twice!). Facing incredible odds, he has continued to be strong and touch the lives of everyone he meets.

Jatin often tells the story of his father, who grew up as a farmer’s son, who studied and worked to give his children a better life. Our dad has shown that same dedication and sacrifice for his own children, giving us everything we’ve ever needed to achieve our goals. We are honored to give back to this community so that others may do the same.

Please consider donating to Jatin's Mean Machines, a team participating in the the Race for Hope DC in his honor. With your help, the Patel family believes one day a cure will be found.
View More
View More
Donate Now
Team Roster
Raised