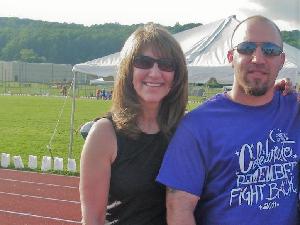 Our team, Justin's Brainstormers is participating in our 11th Race for Hope. The team was originally formed in 2009 in support of my brother, Justin Cohen, just 3 months after his diagnosis with Anaplastic Astrocytoma, a Grade 3 malignant brain tumor.  Justin fought courageously against this disease for almost 2 years, but we sadly lost Justin on July 19, 2011.  He was 30 years old.  Everyday we remember Justin as a fun- loving son, brother, uncle, nephew, cousin; an awesome friend to have on your side. He was young and invincible and struck by a devastating disease. Every day we aim to keep his memory alive by raising funds for this awful disease that took him away from us.

On Saturday, October 12th, Justin's family and friends come together, not only as a team, but as part of thousands of others in the Philadelphia area whose lives have been affected by brain tumors.  We would love nothing more than to have your support on this day by either joining our team to run or walk with us or by supporting us with a monetary donation. Even if you cannot be there on race day, consider joining as a virtual participant (free of charge) to help us fundraise and spread the word.  Raising money to help fund brain tumor research is one way that we keep Justin's memory alive, so that maybe another family doesn't have to endure the heartbreak that we've had to endure.  Every little bit helps in the fight to find a cure for brain tumors and we greatly appreciate every contribution.