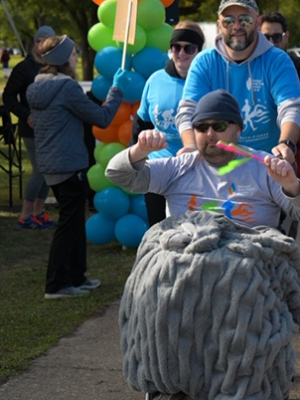 Continuing The Fight For Josh

On December 22, 2015 Josh Rogers, my baby brother, had a seizure. It was discovered that the seizure was caused by a brain tumor. The diagnosis was Grade IV Glioblastoma Multiform. After 2 surgeries, radiation, multiple rounds of chemo and alternative treatments it was determined that nothing else could be done. Hospice was called in June of 2018 and he was given 6-8 weeks. But my brother was stubborn. He fought to see his 37th birthday and to give us one more holiday season with him. On January 23, 2019 he had his final seizure and decided it was time to go. This walk meant a lot to Josh. In 2016 & 2017 he walked it. In 2018 he couldn't walk but refused to stay home so I pushed him the entire way in his wheelchair so he could be part of this event and be in the survivor picture one last time. In 2019 and 2020 we walked in his honor. We know that he will be with us in spirit always so we continue the walk.

Since his death we have started The Josh Rogers Memorial Foundation, a non-profit in his name, given 2 music scholarships in his name and we will continue helping others battling cancer in honor and memory of my brother. Please consider joining the team and either walking "virtually" or contributing financially to the fight against this horrible disease. National Brain Tumor Society will not rest until a cure exists - but more needs to be done. Please join in our effort!